In the stainless steel casting process, pores often appear, which brings many troubles to the casting processing. Porosity is a bubble defect formed by the metal liquid during the cooling and solidification process, and the gas precipitated in the ingot. The following forestry machinery parts manufacturers analyze the main causes of pores:

02: The pouring speed is too slow to fill the spout cup, expose the sprue, get in the air, suck in the slag, and form the entrapment pores and slag holes.

03: Foam model gasification and decomposition generates a large amount of gas and residues that cannot be discharged in time. The foam and coating layer are not dry enough to fill the dry sand. Under the high temperature of the liquid alloy, a large amount of hydrogen and oxygen are cracked to invade the OEM stainless steel casting. The main cause of stomata. 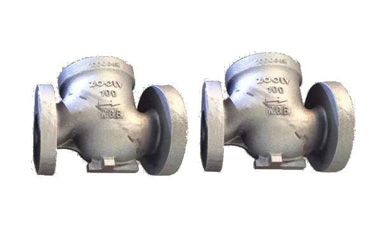 07: The pouring temperature is low, the filling front metal liquid cannot fully vaporize the foam, and the undecomposed residual material has no time to float to the riser and solidify to form pores in the steel casting.

08: Poor deoxidation of molten steel, slag removal in the hearth, the furnace, and the package is not clean, the sedation time is too short, the slag blocking during the pouring process is not good, and the slag hole is caused by the unreasonable pouring process.

09: The opening position of the runner is unreasonable. A dead zone is formed during filling. Due to the gas pressure in the cavity, gasification residues accumulate at the dead corner to form pores. The cross-sectional area of the runner is too large, which makes the filling speed faster Foam gasification yields speed, swallows foam, decomposes and gasifies inside the alloy, and gas cannot be discharged to form pores.

10: The capacity of the gate cup is too small, the metal liquid forms a vortex, and invades the air to generate pores.

Previous: Sent 14 pallets of goods to our Australian customers

Next: Measures to prevent pitting in castings

STAY CONNECTED
By signing up you agree to receive emails from KADI with news, special offers, promotions and other messages tailored to your interests.